It may not be a Cinderella story ending but the Federation of Sovereign Indigenous Nations (FSIN), Battlefords Agency Tribal Chiefs (BATC), and Jim and Mitzi Gilroy might be one step closer to stopping road construction and protecting various artifacts found on their land near Dodsland, SK.

The Memorandum of Understanding ((MOU) signing and press conference was held at the Gilroy farm. 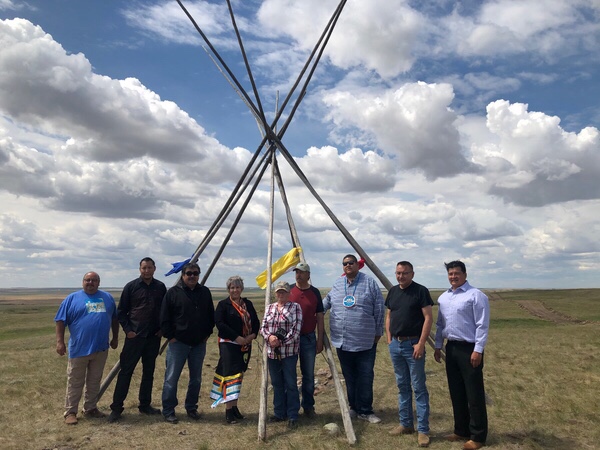 FSIN Chief Bobby Cameron feels the signing the MOU is a step in the right direction.

“We’re thankful for that symbolism. The fact of working together in this two spirit and intent of treaty that’s what it was about,” said Cameron. “We worked together to find better solutions, better communication.”

FSIN and BATC are currently working on stopping construction of the road and making this a sacred heritage site.

“I do hope they are successful in the stopping of building the road. I would like to see what else is out there, if there is anything else. If they want to develop it into a sight that they can visit anytime, I’m all for that,” said Gilroy.

In the summer 2018, several artifacts were found in the Gilroy’s pasture and surrounding area. Another rancher found teepee rings on their land not far from the Gilroys, and Cameron has since been in talks with them.

Although the Gilroys are now leaving things to be discussed between FSIN and RM of Winslow she hopes that the they can sit down and calmly discuss the matter. She does not want any hurt feelings between anyone and hopes they can reconcile their difference of opinion on the matter. She also hopes that if the road really does need to be built, it can be moved to a different location.

“In the spirit of treaty rights, the FSIN supports the BATC chiefs and the Jim and Mitzi Gilroy farm,” said Cameron.

FSIN staff went and set up more teepee poles on June 12th and will continue to do so. If need be, they have permission to set up camp on the Gilroy’s land.

A statement from the RM of Winslow said they are aware of people being upset about the road being widened but they are obligated to follow certain provincial regulations with this construction. As there is no construction planned for June, they are using this time to decide how best to move forward.