An artifact dating back 10,000 years has sparked some controversy over the last few months.

In the summer of 2018, the RM of Winslow had decided to put in a super grid and expand their road. Following provincial laws, Alt Heritage was commissioned to go out and do various studies of the area where the road would be. While there in June and July 2018, Alt Heritage found First Nations artifacts where the road was to be placed.

Although a letter was sent to the RM on September 12, 2018 with their findings, they were still given the go ahead to complete the road. This road would also expropriate several acres of land from the Gilroy family farm, which is right beside where the artifacts were found. Although artifacts have been found on their land, they have not been thoroughly studied yet. 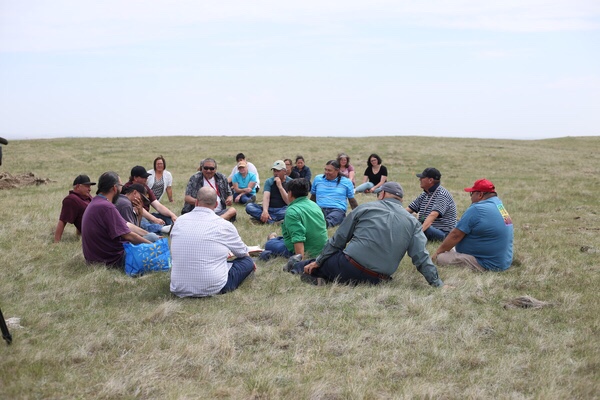 A pipe ceremony was held Tuesday, June 4th on the land where First Nations artifacts were found when the land was being looked at to put a road in. This land has been given official notice to be made into a road and various people have since stepped up to stop this from happening. Photo credit Alexis Christensen

The Gilroy family feels there should have been more thought put into where the road would be placed and there was a lack of consultation after the artifacts were found.

“I think this is very important, especially to the Native people,” said Mitzi Gilroy. “They are losing things like this all the time. They should have been notified of this.”

They had almost given up on the idea of making this a historical site when the RM had received official notification, they could build the road. After speaking with a friend about their concerns the Gilroy’s were given the phone number of Sheldon Wuttunee at the Centre of Excellence. Wuttunee has since been contacting people in the Saskatchewan government, trying to get answers and looking at shutting down the road.

The Gilroy family received a letter stating data and artifacts had been found upon excavation in summer 2018. The letter stated that the youngest level is a few hundred years old and they found things such a First Nation pottery and a stone arrow head. The second layer is believed to be much older after studying fragment of what appears to be a stone spearhead or knife that could be 10,000 years old. It also stated that a small scraping tool made from volcanic obsidian which does not occur naturally in Saskatchewan was found. After this was studied in more detail it indicated that the obsidian originated from Yellowstone National Park, Wyoming.

“There has been a statement made that this could be one of the oldest sites in Saskatchewan that has been found,” said Gilroy. “But, it’s whether or not somebody thinks it’s going to be important enough to save.”

She also feels there has been a lack of cultural awareness surrounding the artifacts. It is very meaningful to them. You can just see it in their faces when they go out there.”

After taking time to decide what to do, the Federation of Sovereign Indigenous Nations (FSIN) along with Battlefords Agency Tribal Chiefs (BATC) and Saskatchewan First Nations Centre of Excellence decided to hold a press conference to express their concerns.

“We, as First Nation leadership and band members, grassroots people will call for immediate action for them to halt all future progress, so they get more direction, more consultation, and ultimately direction from BATC folks and those who are affected,” said FSIN Chief Bobby Cameron.

He also said the Indigenous leadership will do whatever in their power to protect and preserve that part of the province and try to make it a historical site.

A statement from the RM of Winslow said they are aware of people being upset about the road being widened but they are obligated to follow certain provincial regulations with this construction. As there is no construction planned for June, they are using this time to decide how best to move forward.