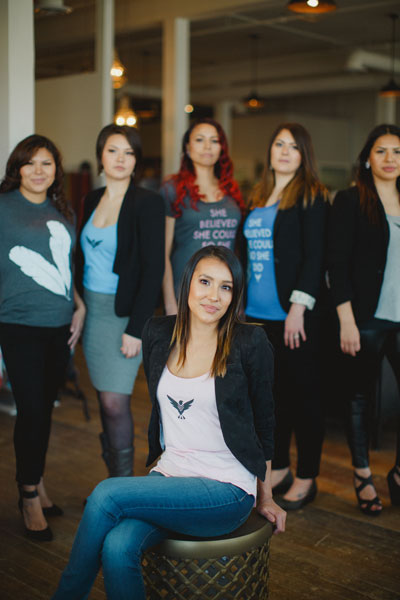 SheNative Goods Inc. is pleased to announce the winning of the, “WIN A MONTH ON MORGUARD CONTEST”, a National Facebook contest launched by Specialty Leasing at Morguard in January 2015.

Aboriginal female entrepreneur, Devon Fiddler, of Saskatchewan’s Waterhen Lake First Nation, entered the contest one evening in January when it popped up in her newsfeed. Fiddler didn’t think she had a chance, but she entered anyway.

Fiddler was notified in February of the winning, and chose the location of The Centre Mall in Saskatoon, where local Aboriginal entrepreneur, Kendal Netmaker of Neechie Gear first started out.

“I’m so amazed by what can happen when you dream big and work hard!” says Fiddler. “I’ve been entering as many competitions, and contests that are entrepreneurial related, as possible! I’ve put in so much work to get the word out and to get my business off the ground! This opportunity will give us so much insight into where we’ll take our company in the future!”

SheNative Goods launches it’s Kiosk on Wednesday, April 15, 2015 at the Centre Mall in between North Shore Outfitters, and Garage Clothing.

To learn more about SheNative, please visit its website.