Ricky Junior “Napew” Sanderson  and his fellow stalwarts have walked from Stanley Mission, Saskatchewan, Canada to Standing Rock North Dakota United States Saskatchewan. Ricky had an awakening call and on November 26th 2016 he responded to that call with a sacred prayer walk to Standing Rock by the Youth Unity Journey for Sacred Waters. 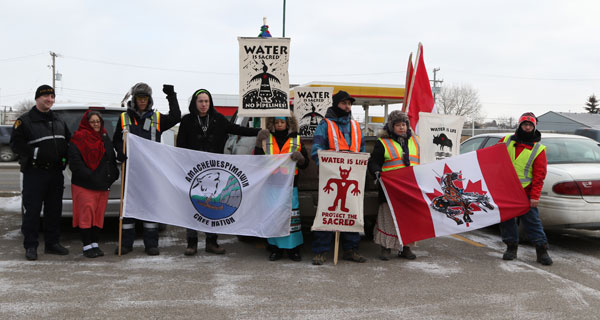 On Day 46 Ricky Jr and his four band of fellow walkers, Charlleen Charles, Michael Roberts, Marjorie Roberts McKenzie and Ricky Sr McKenzie completed the 1200 mile journey at approximately 4:00 pm, January 10th by walking down Standing Rock’s infamous “Flag Road” with a very warm reception by the Standing Rock Camp drum. A great accomplishment to bring into the New Year. The youth originally started out with eight walkers in which we also pay tribute to Celine Charles, Asa Ballantyne and Joyce McKenzie for completing the journey in spirit.

Ricky Junior “Napew” Sanderson, the leader of the youth group, was inspired to save the waters.  “The first thing, I started thinking about is the one thing the youth need in the future in this world is water. Water keeps us alive on this earth that is why we are here today so you can all understand we are protecting your home, your children’s children’s future, to protect mother earth from the oil! What really woke me up was I saw so many posts on Facebook, media, and the news. It scared me to see those things happening. I started thinking of doing something for my people and the whole world so I came up with this walk, Youth Unity Journey for Sacred Waters,” said Ricky. “We are not only doing this for ourselves, not just for Native people, but for the whole world to help Mother Earth in any way we can if we do not do something about this now, it’s going to be too late in the future, and we are going to struggle.”

Ricky Jr put a call for help out specifically to the youth to “Please stand up! We can’t watch this happen now!” Ricky Jr shared the idea with his father Ricky Sr. His Dad told him “Your crazy! You can’t do that by yourself!” The news got to Marge Roberts McKenzie who has had previous experience with a walking journey from Stanley Mission to Ottawa with her husband, Bruce McKenzie in 2013 as part of the Idle No More campaign to express her concerns to then Prime Minister Stephen Harper for water rights. Marge offered her encouragement and experience to the youth walkers. The youth who also joined on this walk were Charlleen Charles and Michael Roberts who are concerned about the hunting and trapping lifestyle that oil threatens upon the waters and livelihood for theirs and future generations.

The most challenging part of the journey was crossing the US border.  The walkers and supporters alike were most concerned about the process and it was a considered a great victory as they gained successful entry across the border.