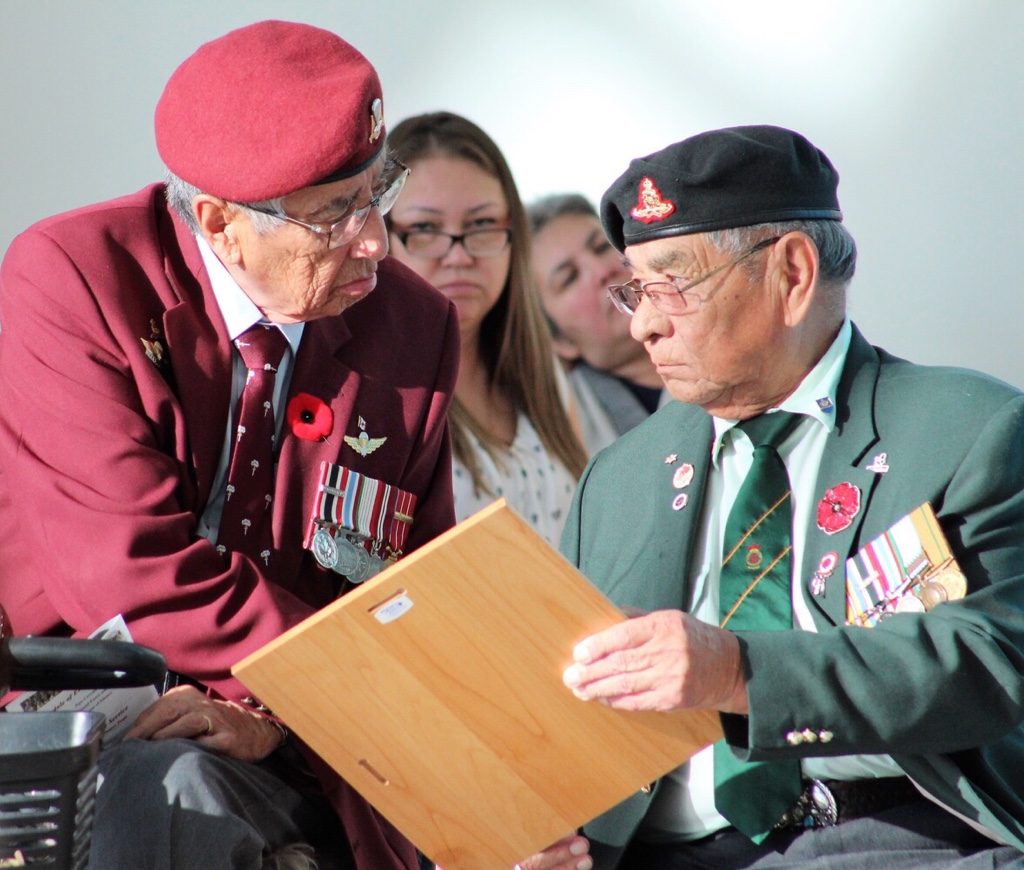 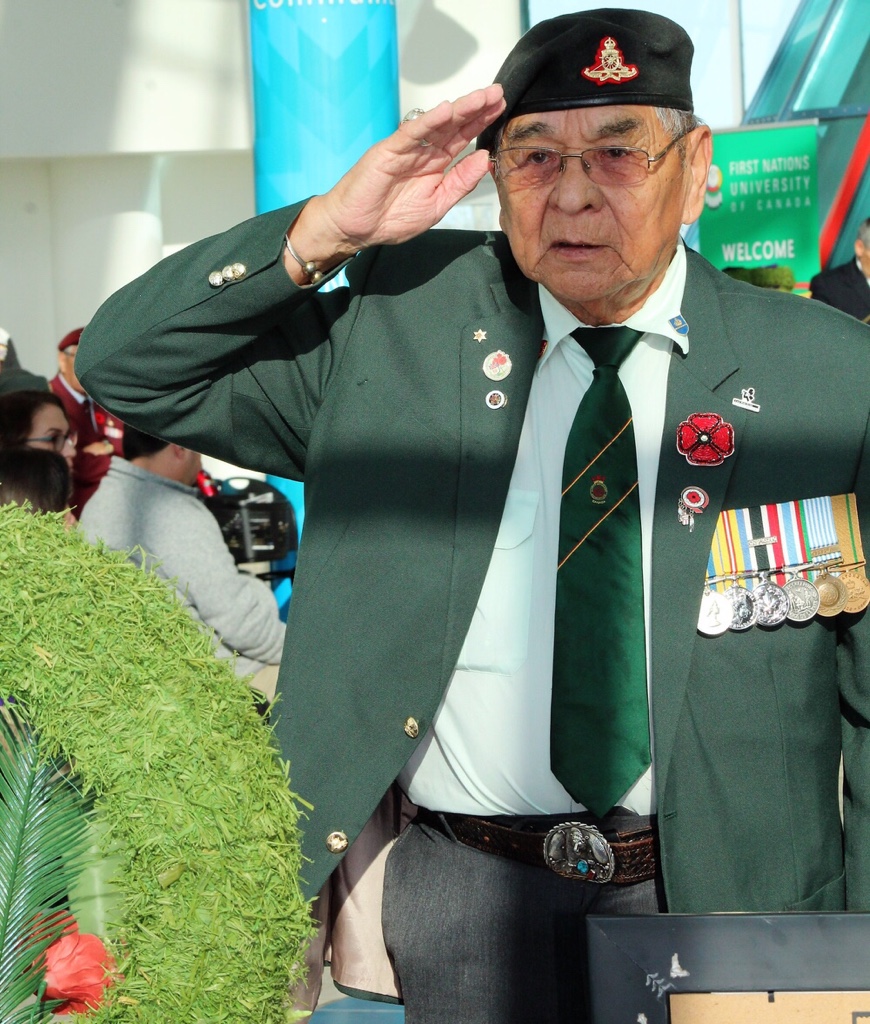 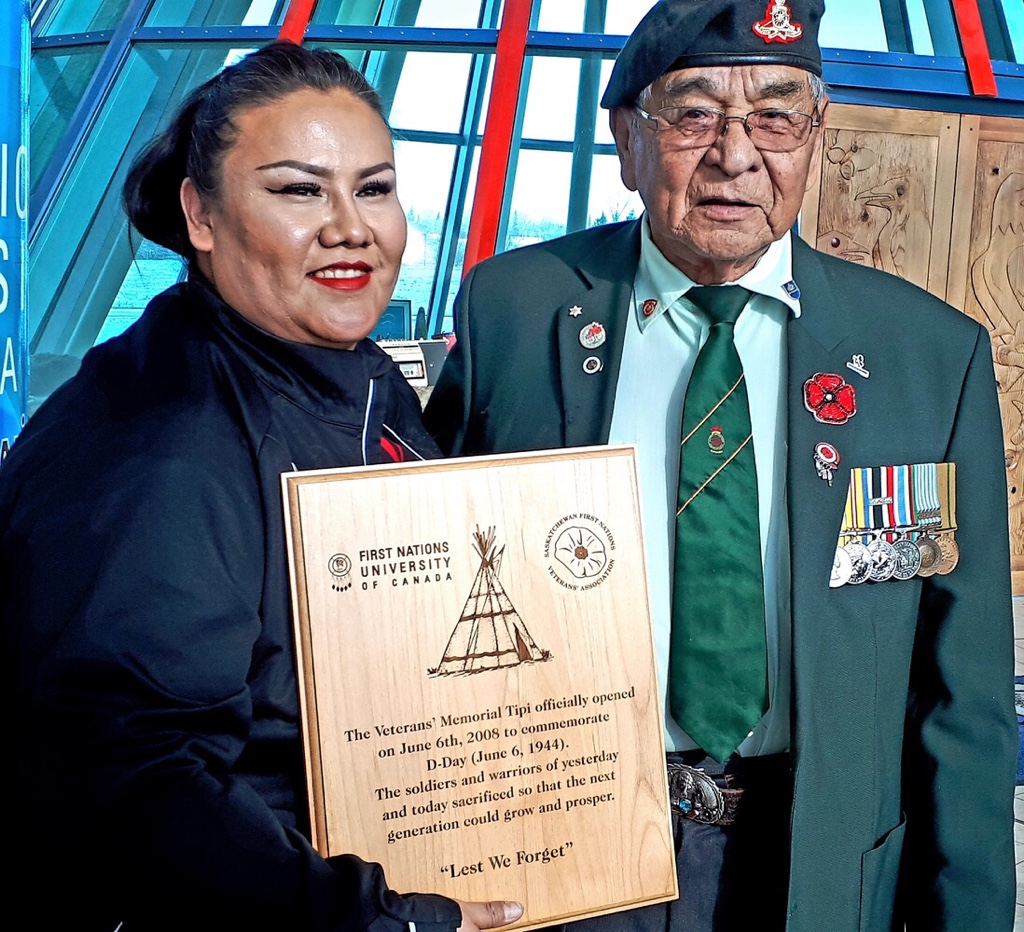 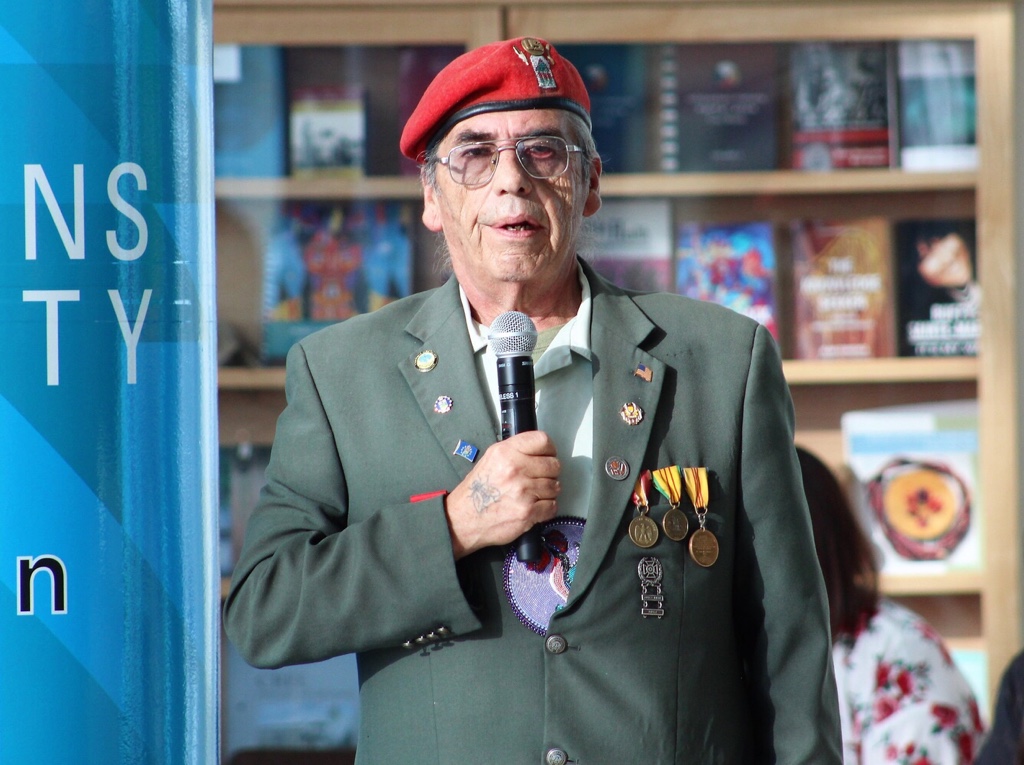 The Remembrance Day service began with a pipe ceremony followed by a grand entry with dignitaries from the Regina Police Service, the RCMP and a member from the Royal Regina Rifles who walked behind the three Indigenous veterans.

Jim Pratt, a retired police officer and former member of the Canadian Armed Forces, facilitated the ceremony on November 8th. The ceremony recognized Indigenous veterans and honoured their deeds and commitment for their people and home communities.

“It’s absolutely important [to honour] those contributions,” said Pratt. “A lot of our veterans are no longer here. We used to have a long line up of veterans and they are now slowly passing away. A lot of them are don’t have the strength to stand up in a parade.”

The Eagle Claw drum group sang the grand entry and soldier boy song. Evelyn Maxie-Poitras sang the national anthem in the Cree language just before the moment of silence. FNUniv Student Association President Lucy Musqua acknowledged the service is held not only in FNUniv’s atrium but in the First Nations Veterans Memorial Tipi. She presented a plaque to Korean War veteran Tony Cote on his contributions to his service in the war and also to the FNUniv. Cote shared a memory of a fellow combatant who finished his term in Korea and was supposed to head home the following day but didn’t make it home.

“War is a terrible thing…when you see your buddy being killed. It’s terrible,” said Cote, who served in the Korean War with the 81st Field Regiment with the Canadian Artillery. “The day before he was laughing at us and said ‘oh, you poor souls, you have a long time.’ It just goes to show you never know when you’re going to go. He was supposed to have gone home the next morning, he was in action [and fought] all night. Low and behold, about 3 o’clock in the morning…he was gone. I felt so sorry for him.”

Veteran Ron “Rocky” Redwood, a Vietnam veteran who served with the United States, acknowledged all of the former and past Indigenous veterans who sacrificed their lives for today’s freedom.

“Some of our veterans are like that…they are humble because they’re brave,” said Redwood. “I thank the older fellas to be brave enough to stand up for a cause why they needed to go and protect their families, their culture and their people.”

Veteran Arthur Anderson from the George Gordon First Nation said the importance of Remembrance Day is to remember the people who gave their lives and those who are still alive. He and veteran Cote chatted before the service and pointed out that they are the remaining veterans left in their home communities.

“At one time, we had about 180 veterans. I think we have about two dozen now. They all passed on now,” said Cote.

Although the number of Indigenous veterans who attend the annual service are slowly dwindling each year, it’s a much-needed ceremony that needs to continue to prosper each year to help the younger generations to always remember our Indigenous veterans, Pratt said.

“We just want people to remember to not let this ceremony go to the side and to keep it going,” said Pratt. “That’s why we’re here today because our freedoms the men and the women of this country gave us.”