Monica Goulet received some wonderful news at the end of February.

After a long journey with kidney disease, the sixty-two-year-old from Cumberland House will receive a new kidney from her nephew, Jimmy Searson, on March 26.

“I just feel so blessed,” said Goulet. “I get to have a better quality of life, so I’m pretty excited.”

Goulet, who lives in Saskatoon and is a former Aboriginal relations consultant for the Saskatoon Police, is a vocal advocate for organ donations.

“When you get news like that you like to be able to share it with people that you love,” said Goulet, who was grateful to be out for lunch with friends when she got the call from her transplant unit at St. Paul’s hospital that the surgery was a go.

Goulet has been on the kidney transplant list since 2015. Five potential donors haven’t worked out and she was taken off the list twice due to health concerns. She undergoes hemodialysis for four hours three times a week at St. Paul’s hospital. Currently, her kidney is functioning at less than five per cent.

“It’s been a real merry-go-round, said Goulet. “(But) they decided that we’re good to go…that was a pretty awesome day.” 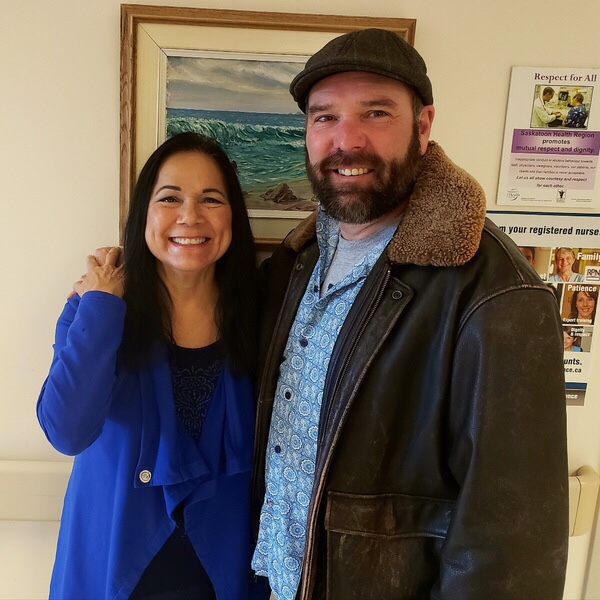 After a long journey with kidney disease, the sixty-two-year-old from Cumberland House will receive a new kidney from her nephew, Jimmy Searson, on March 26.

Searson, who is married to Lac La Ronge Indian Band Chief Tammy Cook-Searson, lives in Kitsaki Reserve in La Ronge. He is a community coordinator for Red Cross and a Canadian Rangers Patrol Group commander. Close to a year ago, he said he woke up one morning and decided to donate his kidney to his auntie because it felt like it was what he was supposed to do.

“I don’t drink, I don’t do drugs, I don’t smoke, I don’t have any addictions like that,” he said. “I felt maybe that’s why I haven’t done any of that kind of stuff for years...to just to be in a healthy position to be able to help her.”

After 10 months of travel between La Ronge and Saskatoon for rigorous tests, Searson found out from his health team that everything was good. Now it’s just a matter of both Searson and Goulet staying healthy and hydrated until the big day.

Goulet plans to write a book about her experience that will be a resource for others still waiting for transplants. Her advocacy work won’t stop just because she’ll have “a new lease on life.”

Told by an Elder in ceremony that her Métis name means “interpreter,” Goulet said she has a responsibility to raise awareness about kidney disease and to advocate for those who struggle with it. She also looks forward to welcoming a new grandchild into the world and checking some things off her bucket list, like dancing in Spain.

Searson asks for continued prayers for his aunt.

“She’s going to continue to be strong advocate for others that might not have as strong a voice as she has,” he said. “So, I’m really proud of my aunt.”