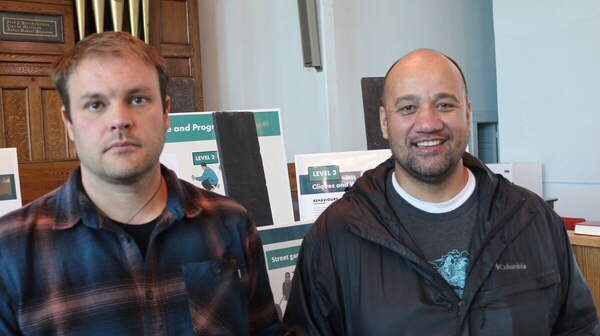 Robert Henry, one of the authors of Phase 2 of the Provincial Gang Strategy Report, with Stan Tu’lnukuafe (right), one of the co-founders of STR8UP.

STR8UP has been working to support those who want to leave the gang life for close to seventeen years, and held a press conference April 16th to release the findings of phase 2 of their Provincial Gang Strategy Report. Father André Poiliévre and Stan Tu’lnukuafe, two co-founders of STR8UP, addressed media along with speakers such as researcher and report authors Dr. Robert Henry and Dave Shanks, Provincial Street Gang Strategy Assistant Shane Partridge, former FSIN Chief Lawrence Joseph, and Dawn Robbins from Prince Albert.

“We need to create hope but if we don’t start in the community we’re never going to start,” said Robbins, describing gang exit strategies that emphasize culture and land-based program, stating there is a lot of urgency to get started. “We’d like to have someone like STR8UP to go to that are experts and have tried, trusted and true models, and have them as support.”

Two days after their press conference, they were invited to the Legislature by the Opposition, where they presented and were told the government still needed time to read their report. Tu’lnukuafe pointed out at the press conference that the provincial government has received $12 million from the federal government, which they have then offered a small number of micro-grants of $20,000 that organizations can apply for: a very small amount to do anything with, and a very small portion of the full amount. STR8UP currently has no regular stream of funding and only one full-time staff member, the Executive Director. They are hopeful the provincial government will see the value of their work and perhaps provide them with reliable resources or revenue to support their initiatives, although they continue to partner with many organizations and apply for grants, donations, fundraising sources, and any revenue streams they can access. They would like to take action with implementing their research and report province-wide, because prevention and gang-exit strategies work better for everyone than police-led suppression tactics, and are what the communities want and believe in.

“Not one community wanted a bigger police presence,” noted Tu’lnukuafe, adding it is often the strategy of various governments to put money into policing and prison industries, rather than prevention and rehabilitation, which ultimately serves nobody but those who are drawing salaries for poverty-and-race-related state violence, mostly against the Indigenous population.

Tu’lnukuafe credits the various communities who participated in their research, many of whom are addressing gang issues off the sides of their desks on top of many other responsibilities and initiatives.

“I don't think we would have had the type of reception we had if it wasn't the last 15 years we've been doing presentations across the province and establishing relationships with these communities,” said Tu’lnukuafe. “When we wrote the report, the first part was we went to the communities and asked them if we were to establish a gang strategy what would it look like? What was really positive and not common for them was we then went back and said here's what we did, this is how we wrote it down, did we miss anything?”

Many communities never see people again after research is done, so they were very open to this Indigenous way of doing things and being accountable to the community as well.

“When we raised the issue [with the provincial government] it was disappointing for me because we started this process with the government last year, and so for them to say they needed more time to read the report was frustrating for me because they had a year already and they knew about it, were aware of it, they're one of our stakeholders and gave us input on who to potentially reach out to,” noted Tu’lnukuafe, adding he fears that the $12 million in federal funds will be used for police, prison, and gang databases versus prevention, gang-exit strategies, and the underlying issues of poverty, detox and treatment, safe and affordable housing, and mental health and addictions. “At the community level, any type of initiative needs to be led by the community - they have the stakes and know what's happening - but time and again the response is to pour more money into the police even though that's not what the community is saying.”

He says the province describes the up to $20,000 one-time microgrants as “capacity building” but in reality, even a full grant wouldn’t give STR8UP capacity to hire even one full-time phone person to take the phonecalls they are frequently getting to support communities and individuals. He thinks changing the way the province does things would help — for example, allowing many groups to jointly apply for individual funding under one strategy that they can all work together on across the province, collaborating and pooling resources and funds, versus competing.

“It's really about how the community is wanting to get something done on this issue, but they’re all looking for STR8UP to be the knowledge and expertise in that area — because we have been doing this successfully for the past 17 years.”

The full report can be accessed at http://provincialgangstrategy.ca/ — it points out that at the first level, positive social groups are a needed building block of society. It is the higher levels which lead up to negative social groups such as gangs and hate groups like the KKK. Henry says it is important to include hate groups on the same level as gangs: just because one group is not an oppressed minority and well-funded and societally privileged, they should still be equally targeted for negative societal impacts. Community solutions are offered, with nearly 1000 participants and 65 communities involved across the province.