Op-ed: Indigenous media like EFN is resilience and resistance

Thank heaven for May and June. They saved me.

I almost quit the paper world last month. Was feeling old and tired and hating deadlines with no down time.

Then I saw a fellow community paper, the Saskatoon Express, shut its doors. They cited the poor market for newspaper advertising, the move of media to the web with little revenue to support it and a community that wanted news faster and cheaper.

They bit the bullet and shut it down. I understood.

The exact same issues have been facing our little outlet for the past three years and it is getting harder each year to stay afloat. So, after awhile you wonder if all the work, worry and running around is worth it, when you are working for free some months.

At the end of last issue, my wife and I had the talk. We agreed to drop the paper and run. Sell it. Donate it. Just get out. Freedom 2020. December and done. No more deadlines. A weight was lifted.

Well darn. If the month of May didn’t see me in Winnipeg delivering a seminar at the St. Boniface Museum and hangin’ with family in the homeland.

It was grounding. Had some copies of the Eagle Feather News that I shared with the folks in the seminar. “Oh,” they said. “We have nothing like this in Manitoba.” Jealous they were.

Then the darn SaskTel Indigenous Youth Awards happened. If you ever need inspiration, just go to these awards. Triumph, leadership, resilience, brilliance. I missed this year for work travel but my wife came home and said we can’t sell the paper. We have to tell those stories. We are different from the mainstream papers.

At the Awards she also met a dad of a nominee. When he found out she was with the paper, he told her his son had been in the paper when he was a young hockey player and wore pink laces to support his friend’s mom who had cancer. The pink laces kid! I remembered taking his photo at Harold Latrace and interviewing him.

And May and June are about news folks ... every school has a powwow or cultural event. Treaty medals and flags and Métis flags are being installed all over. The YWCA honoured so many deserving women at their Distinction Awards.

Tasha Hubbard released her film nîpawistamâsowin: We Will Stand Up, about Colten Boushie and his family. Flying Dust First Nation hosted the FSIN Assembly and had the Prime Minister and the leader of the NDP as guests ... all while they gear up to host the Tony Cote First Nation Summer Games in July for the second time.

And then I finally had a day off and was able to attend a community event. My favourite part of the newspaper business. It was the flag raising for Reconciliation Month at City Hall in Saskatoon, an event packed with survivors, Elders, dignitaries and old friends.

The photography opportunities were endless. And then I saw Veteran and Elder Virginia Pechawis was getting teased by MC Eugene Arcand. She learned forward and gave a big smile. It was beautiful. We told her story a while ago. Canada’s oldest surviving woman First Nation Second World War veteran.

Shortly after, we held a moment of silence for the survivors. They matter. 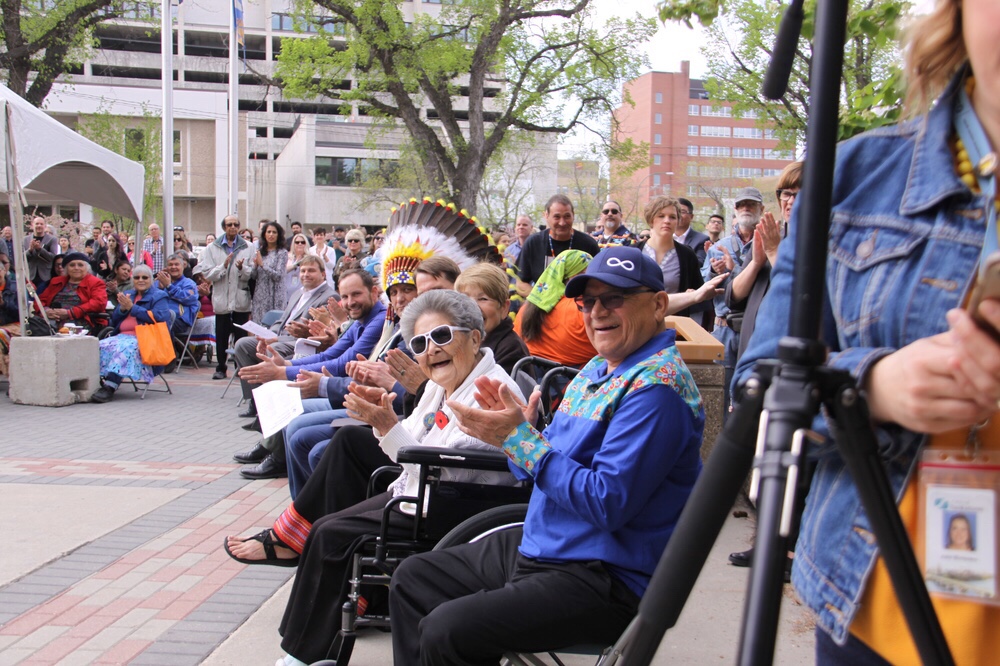 WWII Veteran Virginia Pechawis throws out a world class grin in response from teasing from emcee Eugene Arcand as MN-S President Glen McCallum looks on. People were gathered in the City square to raise the Reconciliation flag for the month of June. Photo by John Lagimodiere

Then I got an email from an old University friend who went on to be a PhD in Sociology. She now teaches at the University of Saskatchewan. Métis no less. Super smart. She has a Masters student who is doing a project about news media, Eagle Feather News and Indigenous peoples’ representation in the media and she wanted to interview me.

And then she said this: “The Sociological thinking is that a paper like Eagle Feather News somehow represents Indigenous resilience and resistance to dominant narratives in other Canadian news sources (or even just Saskatchewan).”

I always just said good news stories when I described our paper, but never heard it academically like that. Blew my mind. Damn.

Now there is no way we can quit when someone says that. It sounds important. We just need to sell some advertising. Tell your bosses to support Indigenous media.

It also makes us feel good to tell those awesome stories or get that amazing image. Lost that for a bit. Glad I got it back.