Bella Arcand-Lafond just had the thrill of a lifetime.  She was fortunate to throw out the first pitch for a Toronto Blue Jays and Tampa Bay Rays game at the Rogers Centre in Toronto. 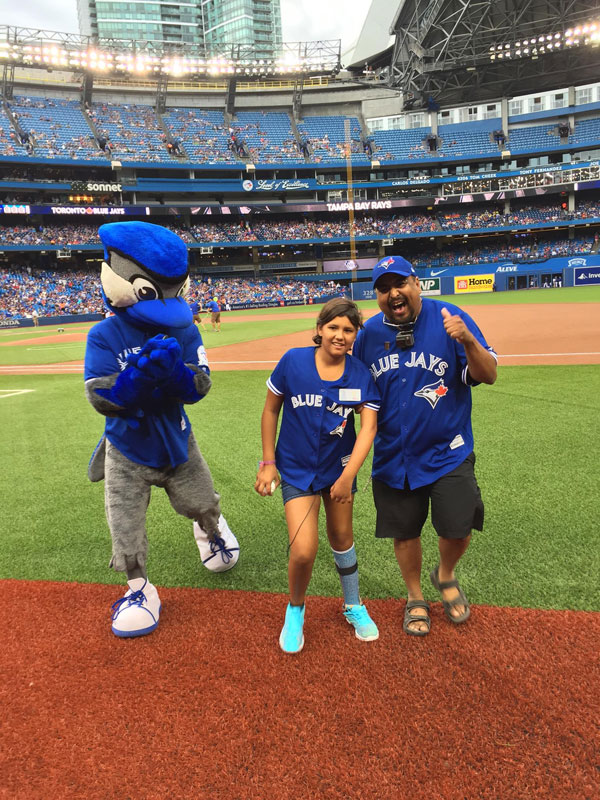 Ace and Nathan Martell escort an elated Bella Arcand-Lafond off of Rogers Field after Bella threw a one-hopper opening pitch for a strike at the Toronto Blue Jays game. Photo by Carol Lafond

Bella was chosen to throw the pitch through a contest held by Dairy Queen and the Children’s Miracle Network. Several years ago, Bella was diagnosed with Rasmussen’s Encephalitis (RE), a rare brain disease that caused her to have seizures dozens of times daily. She has had a surgery since then and has improved but there are still challenges. But this youngster still has an amazing spark of life in her and a never quit attitude.

At the big game, Bella threw a beautiful one hopper that crossed the plate low and outside but good for a strike. After the pitch, Bella was asked what it was like to represent sick and injured kids.

“It was a good experience. I like to see them going to have a great time and not worrying about their sicknesses.”

Bella is from the Muskeg Lake Cree Nation and she was joined by about 25 family members from across Canada at the game. Her uncle George and his wife Mary-Ellen and their children came from Victoria, Councillor A.D. Lafond and Bella's uncle and his daughter Helena made the trip from Muskeg Lake. Cousin Jaime Lavallee from Treaty 4 territory also travelled for the game. The family also received support from friends from various parts of Canada like Ottawa, Kingston and Grande Prairie.

Her pitch was the highlight of the night as the Rays went on to pound the Jays 9-2.