Week 4 has been completed with two fantastic games in Northern Saskatchewan played on Thursday, September 29. 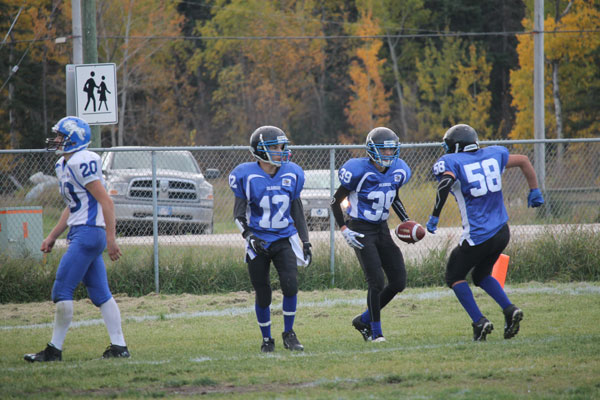 The first game of the week saw the Sandy Bay T-Wolves defeat the Senator Myles Venne Huskies at the Lac La Ronge Indian Band by a score of 60-14. The T-Wolves were powered by three touchdowns each by Fabian Morin and Cory Spencer. Nigel and Virgel Bear each had a touchdown for SMVS. The second game of the week featured the two unbeaten teams, La Ronge Churchill Chargers at Cumberland House Islanders. The first half of this game was a defensive affair with La Ronge leading by a score of 8-2. In the second half, the hometown Islanders had seven different players score one touchdown each to lead Cumberland to a 48-32 victory.

Looking ahead at week five of Northern Saskatchewan Football action, three games will be held. On Tuesday, Cumberland House will look to finish the regular season unbeaten as they host Sandy Bay. On Wednesday, Beauval travels to Pinehouse. On Thursday, Creighton travels to La Ronge in a game that will see a rematch of last year’s 2015 2A finalists. Good luck and safe travels to all teams.