The sky’s Askiy were loud with a northern summer thunderstorm with the lightning and thunder that make you think that was close, the type you find in mid-July in Saskatchewan. My daughter Neave and I waited in a line of hundreds of vehicles with the windshield wipers working at full speed, waiting to turn onto the grounds of the 2019 Tony Cote Summer Games hosted this year by Flying Dust First Nation. We were both excited to be a part of the games and representing with the Saskatoon Tribal Council’s team. I knew of the games and the importance of how sport is for young people, and how it builds self esteem and life lessons, it was going to be a great opportunity for everyone. 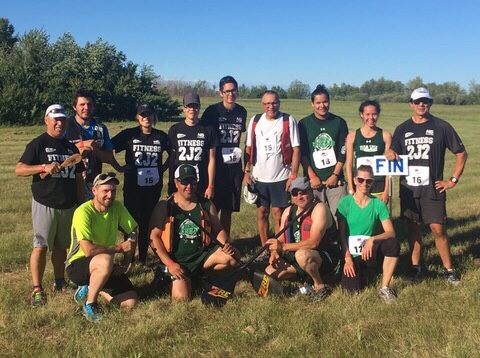 We made it in to the grounds and found an amazing scene in the mud and rain, thousands of athletes, coaches, family members all preparing for the opening ceremony’s and the start to the games, you could feel the excitement. In the athletes village there were camping tents scattered all over the area, some were rain drenched and sitting in puddles, some communities had huge tents large enough to shelter hundreds of people. As I heard a voice call my name, my friend Norman Mackenzie from La Ronge waved us over. We stopped in at the Woodland’s venue and escaped some of the storm. It was great to catch up with him as he had just finished racing in the Riel Relay in Batoche the week before and was again coaching and volunteering for the games.

I first met Norm about seven years ago when I was providing a week-long functional fitness program in La Ronge at the school and community. Norm had invited me to run a session for the Boxing Fitness group; from that time on we kept in contact. It has been so awesome to see him promote healthy and positive lifestyle, and be a role model for his kids and community. He has won numerous King Trapper events. For anyone who has not seen these events, I would put the events up against anything that Crossfit or a strength endurance competition provides. Norm has assisted and coached both his kids to many track and field championships; a strong supporter for the involvement of track and field in Northern Saskatchewan. He volunteers in his community; and always has a smile and a positive and encouraging way in which he lives and shares his lifestyle.

As the thunderstorm started to slow, we had accepted that flip-flops and bare feet were probably the best way to make it through the grounds at this time. We saw that kids were playing and making the best of the situation, some volleyball and mini soccer games; all the different uniforms and community jackets and ball caps. It really was inspiring to see the pride and confidence everyone had and to be part of this big event. With the opening ceremonies completed the games started; Neave’s team was competing in soccer, the girls were excited to play, some had made it to a couple of practices but most had never met before. They all played hard and enjoyed the time they had at the games. Preparing for the games takes time for the athletes and the behind the scenes activities. A huge shout out and thank you to the volunteers from all the communities, and to the organizers that made these games memorable for many participating and attending.

If you are in Saskatoon this summer, check out Fitness 2J2 programming including Youth Dry Land Hockey sessions during the day; Co-ed and ladies only functional fitness sessions in the evenings. Send us a message to jp@fitness2j2.com for more info.

Fitness 2J2 is a socially responsible community based health and wellness company. Contributing to the success and vitality of our communities, promoting healthy and positive lifestyles for Indigenous people of all ages and abilities. STRONG HEALTHY PROUD