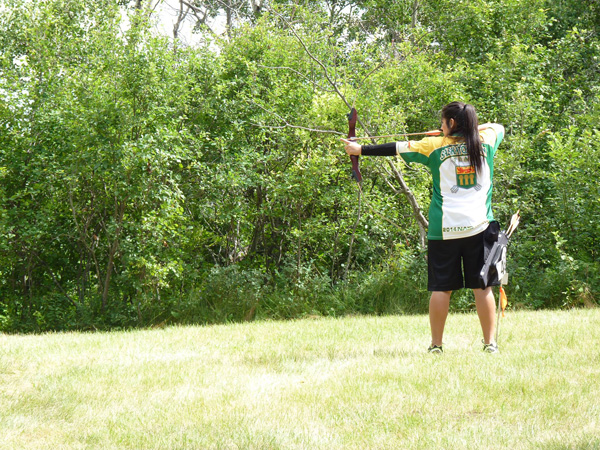 Heather O’Watch from Okanese First Nation will be competing in the first ever World Indigenous Games to be held in Palmas, Brazil on October 23rd to November 1st.

The archery athlete first found out about the World Indigenous Games last year and she made it her mission to contact the Canadian organizer and express her interest in participating in the games.

O’Watch first picked up a bow and arrow in May of 2013. She participated as an athlete in archery for the Saskatchewan First Nation Summer Games 2013 held in Muskoday First Nation where placed 2nd in her age category. She didn’t stop there. O’Watch competed for the North American Indigenous Games (NAIG) last summer which she placed 5th for Team Saskatchewan. She also competed in the Saskatchewan provincial 3D shooting competition 2014 and placed gold in her age category for traditional shooting.

Through all her achievements, O’Watch couldn’t have done it without her role model, her mother. She is proud to say her mother is her main supporter.

“She is hard working, caring, and has always encouraged me to follow my dreams. She raised all four of my siblings and I, by herself and her strength is reflected in all the many achievements she has. It is really important to have a support system in achieving goals.”

O’Watch’s future plans are to finish her degree in journalism and to travel. Her interests are in international relations and has hopes to obtain a career within an international organization. Currently, O’Watch is in Colombia in South America on a four month internship.

Her advice for any youth who would like to participate in the next World Indigenous Games is to keep a close eye on them through their social media pages to look out for the opportunity.

The World Indigenous Games is premiering this year for the first time ever with over 30 different countries around the world participating. According to O’Watch, Brazil alone will be representing 24 different Indigenous tribes. Athletes from each country are delegated to represent in the games and an estimated 2000 participants will be playing in 11 different sporting categories.