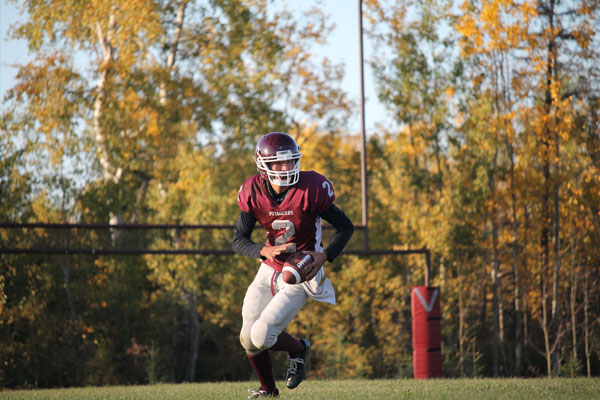 Beauval Voyageur quarterback, Aidan McCallum who led his team to victory this last week over the Pinehouse Lakers.

Week three has wrapped up in the Northern Saskatchewan Football League and two unbeaten teams will be meeting each other next week.

On Wednesday, September 14 a fantastic game was held in Beauval between the hometown Voyageurs and the visiting Pinehouse Lakers. The lead in the game changed several times as both teams battled until the final whistle. Tyson Kyplain and Terence Buffin each scored two touchdowns to lead Beauval to a 50-41 victory over Pinehouse. Dray Tinker recorded three touchdowns for the Lakers.

On Thursday, September 16, the Creighton Kodiaks hosted Cumberland House to take on the Islanders. League leader, Zaine Fiddler scored four touchdowns to pace the Islanders to a 57-26 win over the Kodiaks. Jordan Schanowski score two touchdowns for Creighton. Later in the day, the La Ronge Churchill Chargers held the first ever game under the lights, when they played their cross town rivals, the Lac la Ronge Indian Band’s, Senator Myles Venne Huskies. The Churchill squad demonstrated exceptional speed and power on offense and defense by taking the game with a score of 105-0.

Looking ahead at week four of Northern Saskatchewan Football action, two game will be held on Thursday. The first game will see two unbeaten teams face off. The 2-0 Cumberland House Islanders will host the 2-0 Churchill Chargers. This contest promises to be an exciting game.  The second game will see Sandy Bay T-Wolves travel to the Lac La Ronge Indian Band to take on the SMVS Huskies. Good luck and safe travels to all teams.