Week 5 has been very challenging with the weather conditions in northern Saskatchewan.  Two of the scheduled three games were completed. 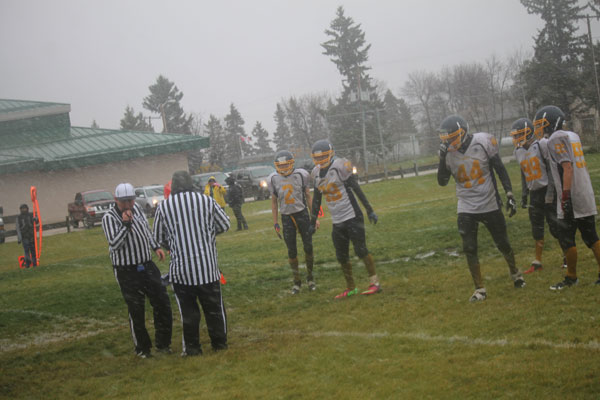 The first game of the week was on Tuesday, October 4 and saw the Sandy Bay T-Wolves travel to Cumberland House to take on the Islanders. The temperatures fell to around freezing as the game was played in rain and wet snow. The game was a defensive struggle with numerous fumbles as the players completed with the elements. At the end of regulation time the teams were tied at a score of 6-6. In the second possession of overtime, Sandy Bay’s Fabian Morin was able to score a touchdown and hand the Cumberland House Islanders their first loss of the season.

On Wednesday, October 5 the Beauval Voyageurs were in Pinehouse to compete with the Islanders. The weather was very cold although there was still no snow when the game was played. A back and forth game, the Beauval team powered by three touchdowns by Aiden McCallum, came up with a 44-34 win.

The third game of the week, Creighton at La Ronge was postponed due to excessive snowfall and making travel hazardous. This game has been rescheduled to be played today (Tuesday) in La Ronge at 1:00 PM.

Looking ahead at week six of Northern Saskatchewan Football action, only one scheduled games will be held. The NATA Convention Bowl will be played at the Max Clunie Field in Prince Albert on October 11, 2016 at 7:00 PM. This game will be played under the lights and we would encourage media to attend this game, which will determine the playoff standings which will commence on Saturday, October 15 with the 2A semi-finals.