The 2018 Federation of Sovereign Indigenous Nations (FSIN) election saw Bobby Cameron re-elected as Chief, while Morley Watson was also re-elected as First Vice-Chief, and Edward Dutch Lerat was re-elected as Third Vice-Chief. The final results were from 1053 eligible voters, with 949 ballots cast in each race. In the Third Vice-Chief race, 3 ballots were rejected/spoiled: Christine Jack received 124 votes, Corey Bugler 355 votes, Lerat winning with 467 votes. In the First Vice-Chief race, there were 11 spoiled ballots, Darin Poorman received 414 votes while Watson was elected with 525 votes. In the FSIN Chief race, there were 6 rejected ballots, while Delbert Wapass received 216 votes, and incumbent Cameron won with 727 votes. 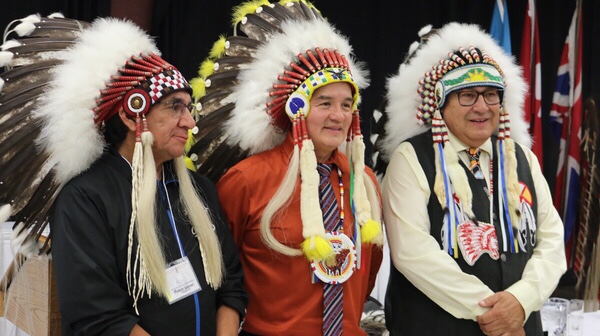 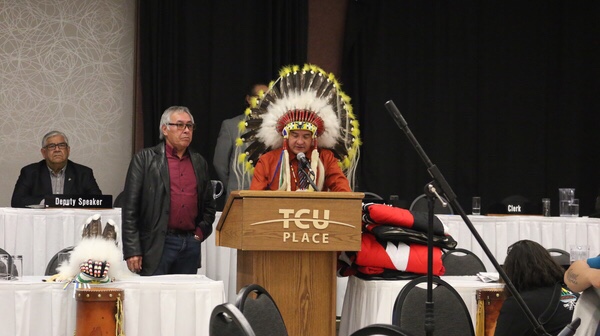 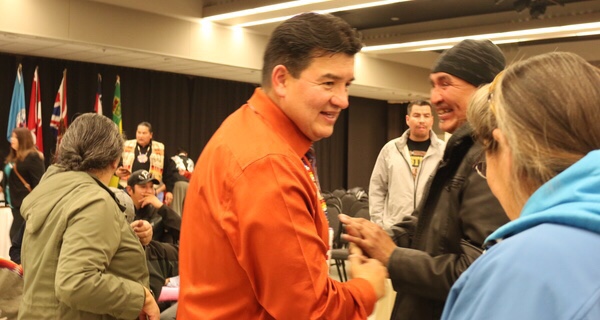 “I have humbly given my word that I will serve to the best of my abilities. I will continue to be accountable to you, our tribal councils,” said Lerat. “I thank all of those who supported and those who chose to go a different way. I respect that, that is our democracy...once things are over we move things behind and go forward.”

Lerat also gave recognition to the other candidates who ran against him, Christine Jack and Corey Bugler, and was followed by First Vice-Chief Morley Watson.

“Our Federation is 70 years old, and to me it’s a gift from the old people. A gift that the old people realized at that time, and maybe at this time, we have to speak with one voice. The challenges are too great for us to speak individually. And so, I’m glad, and you know when somebody’s down there are two things that can happen: you can kick them, or you can help them back up,” said Watson, after giving many thanks to his supporters and promising to also work equally hard for those who had supported the only other candidate, Darin Poorman. “Our Federation is going through a tough time, let’s stick together. Let’s help our Federation back up. If we don’t do that then we do a disservice to the great vision that built this Federation to what it is.”

His remarks were greeted by applause from the approximately 1000 voting delegates from across the province. Watson also singled out Lawrence Joseph for leading the province and country in prayer after the Humboldt bus accident, when 16 young hockey players lost their lives.

“Everybody here is important. We have many challenges, and five executive members or 74 chiefs can’t do it alone. It’s up to all of us, every community, 150,000 strong and that’s what it’s going to take to make things better for our children. We have a challenge, let’s go and do it,” said Watson.

Cameron spoke last, greeted by enthusiastic applause, calling the FSIN the “strongest organization in Canada” which was greeted by more applause.

“We are the strongest First Nations organization in Canada. You come to our region, you’re going to meet 74 bands sitting in one meeting group,” Cameron said, comparing that to other regions where there are several groups representing that many bands. “Congratulations to my colleagues, our colleagues, Heather Bear, Morley Watson, and Dutch Lerat. And to the other candidates: Delbert Wapass, Darin Poorman, Christine Jack and Corey Bugler. We thank them for putting their name forward because it takes a lot of guts and courage.”

Cameron wished safe journeys home to everyone, noting that he was going to spend time with his family now, and shared the news that he and his partner are expecting a little one in January. From the podium, he briefly addressed the recent controversies that have made the news, but only by saying he would not be taking questions about them.

Following their acceptance speeches, the three elected chiefs were presented with blankets, smudged, and welcomed with an honour song. The two-day election process took place in Saskatoon at TCU Place, and is followed by the FSIN Pow-wow at SaskTel Centre over the weekend.