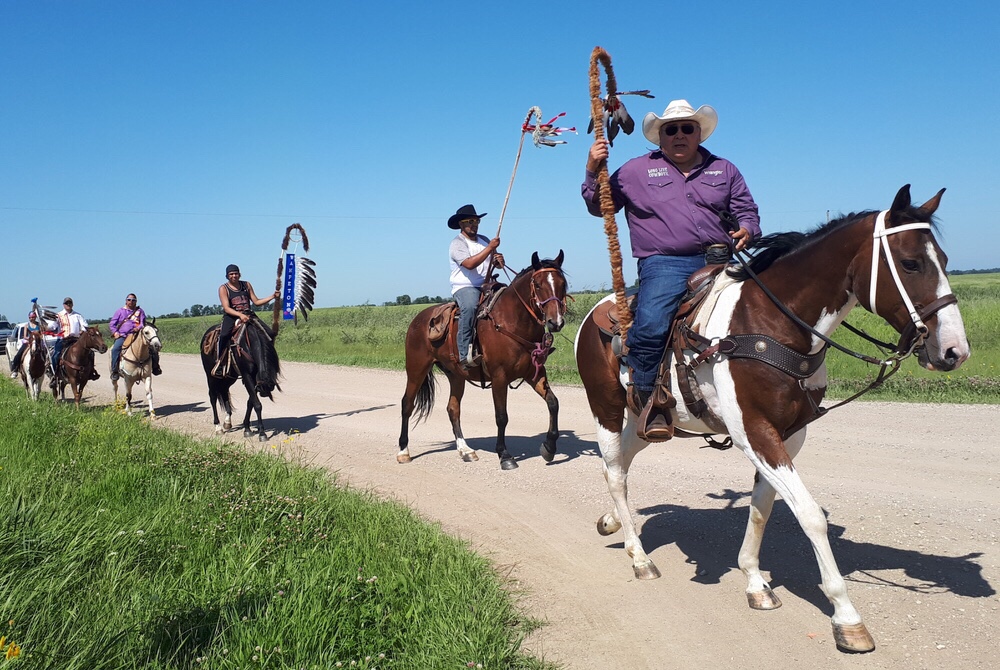 Six riders started the Bring The Children Home ride which kicked off in Wahpeton Dakota Nation to raise awareness on the issue of Indigenous children in care. Photo by Jeanelle Mandes

An Indigenous organization organized this one-of-a-kind horse ride to bring awareness to the issue of Indigenous children in care. The QBOW Child and Family Services planned a 600 km horse ride called Bring Home the Children Ride which kicked off in Wahpeton Dakota Nation on August 2, 2019.

The horse ride’s final destination is Wood Mountain Lakota Nation in Southern Saskatchewan, where the journey is expected to take 13 days to complete.

Check out our Photo Gallery for more photos.

“We’re going to use the spirit of the horse to bring an awareness of the children who are in foster care, residential school survivors and 60s Scoop children to symbolize an effort to bring these children back into their communities,” said Neil Sioux, QBOW Cultural Coordinator, in a media release. “This ride will not only bring awareness of this growing blunder, but it will also address the fact that First Nation communities have an inherent right to self-determination including the right to care for their children.”

Earlier in the week, the Bring Home the Children Ride kicked off with a commitment ceremony and pledges where riders spoke about their experiences and intentions for participating in the ride. A horse dance and a sweat ceremony was held on July 31st with a feast following the day after.

Although the horse ride started off in +32 weather, a convoy of supporters followed behind which carried water and food for the riders and horses.

FSIN Chief Bobby Cameron was in attendance amongst other Indigenous leadership at the opening ceremony of the horse ride.

“Bill C-92 has passed now and this ride will symbolize and signify what we’ve been doing to bring our children back home to where they belong,” he said. “[FSIN Vice-Chief] Morley Watson said something real powerful and it stuck with me and many people across Canada. He said ‘our children are looking out the window waiting for us to bring them home.’ Let’s go get them!”

The horse ride continued through to Beardy’s and Okemasis First Nation, Whitecap Dakota Nation, through the Qu’Appelle Valley First Nations of Piapot, Muscowpetung, Standing Buffalo and will end at Wood Mountain Lakota Nation with a feast on August 13th.