Fitness Tips from Fitness 2J2: Set your goals so high, only a fighter jet can take you there!

Have you ever looked up and saw or heard a military jet fly past and wonder what it must feel like to be in it? I know I certainly have. I’ve always been impressed by the speed of the planes, and the ability of what the pilots can do with those machines. 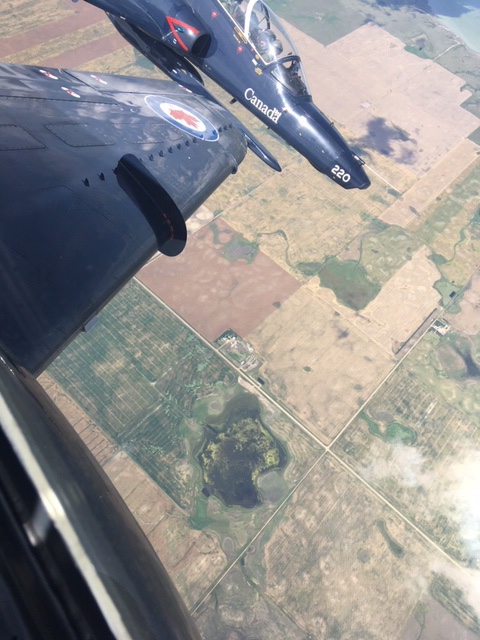 As a young soldier, I recall standing in my trench during a long summer training exercise. Two CF-18 Hornet Fighters came tearing in, and simulated strafing and bombing runs of our positions. At some points, it seemed like they were only a few hundred feet of the ground; and I could see the pilot’s helmet and reflective visor, as they ripped past. Just watching them fly together, doing loops and turns that made me forget how tired, dirty and hot I was standing in the trench. The other guy in the trench looked at me and said, “I wish that was us!” and we laughed. Right at the end the fighters slowed down, rocked the wings of the plane from side to side as to wave, and boom they were gone. That was almost thirty years ago and still one of the coolest memories from the army (I do have a few others, that’s maybe for another time).

Earlier this month, I had the extreme privilege of attending 15 Wing CFB Moose Jaw and experience some of what our military jet pilots go through to become fighter pilots. Bravo Zulu to the men and women who climb into those planes put their lives on the line each time they go up in the air, and to the ground crew and technicians that ensures the safety of all to make operations happen. 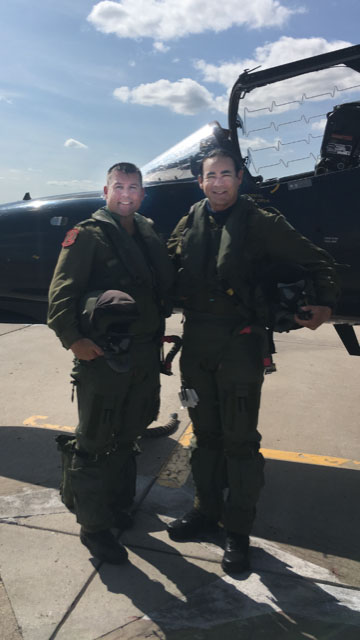 Arriving at 15 Wing, my colleague and I were met by the Operations Officer Jeremy Bouchard, an experienced Captain who I had talked with and emailed a number of times over the earlier few months. Confirming our paper work was ready to go, we were off to clothing stores and issued flight suits, gloves, protective fire resistant shirts and pants.

Our next stop was for individually tailored sized for the helmet and G-force suits (anti-gravity equipment). The process was very detailed and precisely done, the technician’s name was Jim. He had been fitting pilots helmet’s, respirators and G-suits for over 35 years, trained with British, American and Australian Airforce’s. Jim had lots of stories about the many aviators he had worked with over the years, and helped pass the time during the couple of hours it took for the helmet and G-suit fitting.

Next was extraction seat training and immediate actions for ejection from an aircraft. Pilots have to re-certify every 30 days, regardless of rank or position in order to stay operational. Our safety technician’s name was Mario, very professional with significant amount of time in jets with the Snowbirds and the training of pilots. Mario had a great sense of humour, and teased me once he found out that I had jumped out of planes. “Why would one jump out of a perfectly sound aircraft?” he smiled at me and finished by saying, “When you could fly 1000kms an hour and shoot down other planes”. 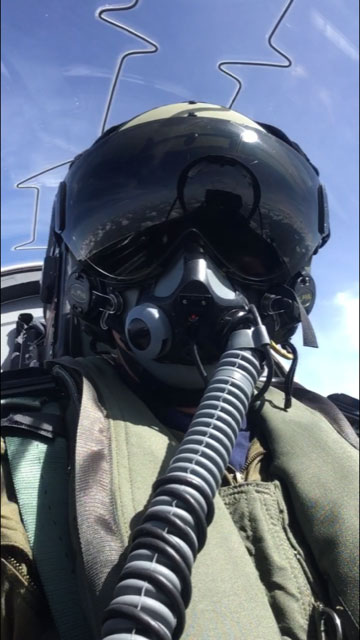 Our last stop would be to complete our pre flight medical. I will have to admit the Airforce is somewhat different than the Army. Everyone did seem a bit friendlier, and had a lot of time for conversation. The medical staff completed the tests and final interview with the doctor. We were good to go, confirmation letter in hand we headed back to meet with Jeremy. Our next timing would be the following day to meet the pilots and go though the flight safety briefing before flying.

We met our pilots NoJoe and Ash; the flight briefing was standard military procedure similar to that in the Army for orders briefings. The language and terms sounded familiar but definitely unique to what we were about to a part of. I was to fly with NoJoe, both planes would fly in some formations otherwise it would be battle manoeuvre’s and aerobatics. NoJoe had flown CF-18’s in combat and had 25 years of jet aircraft experience and now an instructor at 15 Wing. Very calm and professional, we talked through the flight plan; once the plane was signed out, all four of us went out to the two planes. Strapped in to the seat; air, oxygen and communications plugged in. We taxied onto the runway, final go ahead and boom, we were in the air 220km to just over 1000kms per hour.

For the next hour and a half I experienced 4 to 5 G-force on the body, we flew huge loops, barrel turns, straight up to 30 plus thousand feet, and straight down to skimming the ground at a few hundred feet. Then it was time, NoJoe said to me “Joel, are you ready? Controls are yours!” I replied, “Roger that, controls are mine!” And for the next couple of minutes, I felt just how fast I could make that plane go. NoJoe came back on the communication and said, “Joel, return control to me?” and I replied, “Controls are yours?” with the reply from NoJoe, “Controls are mine!” We flew some formation manoeuvres with the other plane, and it was time to come back down to the ground.

I was lucky I didn’t have to use the airsickness bag, but I can honestly say I was physically exhausted like I had finished a triathlon. The level of physical and mental fitness that it takes to do that job is outstanding. The consistency, dedication and focus those jet pilots have really is impressive. I think NoJoe took it a bit easy on me with that flight, but in my mind it was the most incredible experience and forever grateful for the opportunity.

Life is full of incredible opportunities, when we live healthy and positive lifestyles. Have focus and determination, as only the sky will be your limit, if you let it.