A set of twins from the Ochapowace First Nation do everything together, including competing together at this year’s National Aboriginal Hockey Championship in the Yukon. Jordyn and Kyla Bear, 15, have been playing hockey since they were four-years-old. 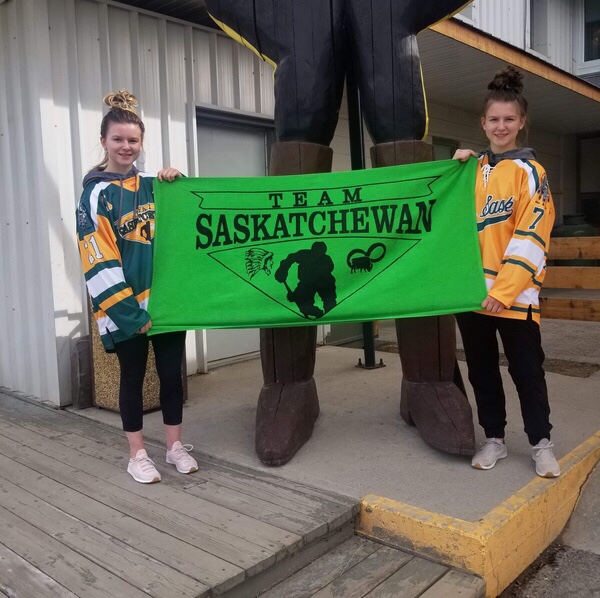 “My family is a hockey family and they [introduced us] to it and we fell in love with it,” said Jordyn, who plays centreman. “It’s a good feeling playing with my twin on the ice. We’ve always had that connection.”

This was the Bear twins second time competing in this tournament when it was hosted in Membertou, Nova Scotia last year. It was an exhilarating experience that they want to have again.

“I like how close the girls get together and work together as a team,” said Kyla, who plays defenceman and for the Melville Prairie Fire.

Jordyn said she gets her inspiration and motivation from her brother, Kirk Bear, who played in the WHL in Prince George. She added they work hard to perfect their craft in this sport by training every week and are on the ice every second day.

Kyla hopes to go into college to play hockey but also hopes to pursue a career as a veterinarian. She looks up to Cote First Nations member, Brigette Lacquette, who played for Team Canada in the Olympics last year.

The twins are looking forward to meeting new people, have a different experience from the last national games and to win gold.

That’s the kind of enthusiasm that Ken Thomas, the FSIN Director of Sports, Culture and Recreation, likes to see when the youth from Saskatchewan attend this annual hockey tournament.

“A lot of [the athletes] continue with their education promoting healthy lifestyles and being role models for their First Nation, Inuit and Metis communities,” said Thomas. “We’ve had players that come through our system that played in the NHL and went on to go play college or university hockey. It’s a program that a lot of scouts come to look at First Nations players that they don’t get to see in the season.”